It's already been a little while, but I just wanted to blog about the NCRA convention while it was still somewhat fresh in my memory!

It all started on Thursday. I got there early, set up the Open Steno Project table, and then headed over to the Realtime Contest. I'd never competed before, and I knew that test nerves were definitely going to be a problem, but I wanted to give it a shot. Since I've never taken testimony in my life, I didn't care much about the Q&A (and, predictably, I bombed it), but I managed to struggle through a halfway decent Lit that sounded smooth and almost ponderous to my ears, but was thwarted by my thumping heart and jittery fingers. Later I found that I came in at 11th place, which was good enough that I wasn't totally disappointed in myself, but not quite good enough to be satisfied. Next time, whenever that may be, I'm gonna aim for top five.

After the test, I met up with some of my long-time steno Twitter buddies for a food crawl. From right to left: nerd_for_words, @mscourtreporter, her husband @chefie_b, his cousin (dunno if she has a Twitter), me, and StenYes, plus two photobombers in the back. Not pictured: The charming but elusive depo reporter @chr1st0p43r. 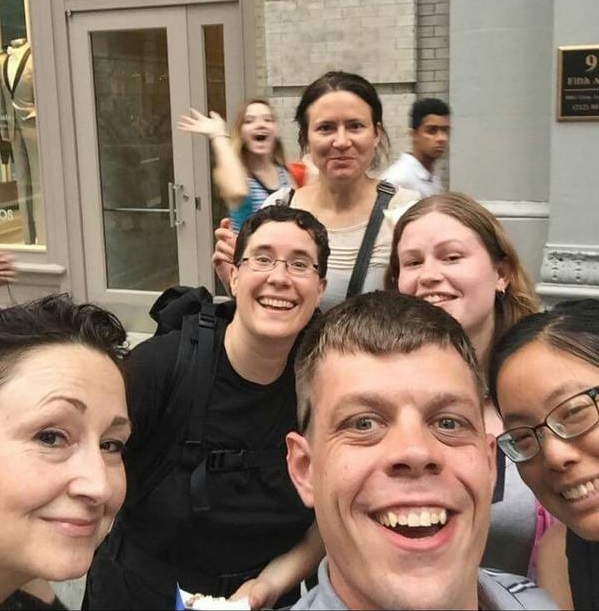 We had everything from banh mi to roasted okra to bubble tea to vegan sushi to waffles to black sesame milkshakes to deep-fried shrimpy radish cubes, and it was all AMAZING.

Grinning and replete, I rolled home and into bed to prepare for the next day.

Friday morning, I got to speak a bit about the Open Steno Project at the opening session (here's me being an excitable dork about steno, with Dom Tursi looking less than impressed): 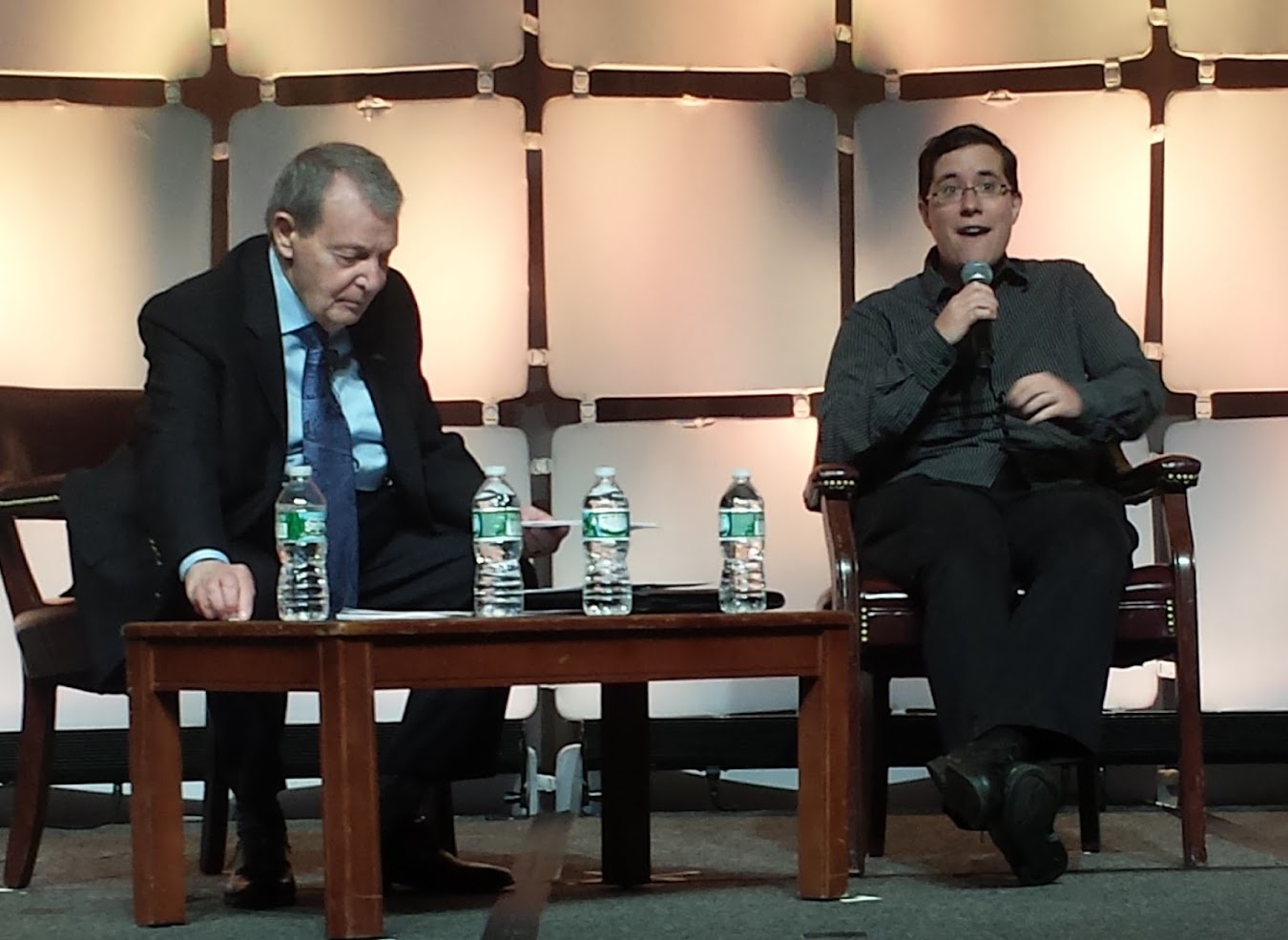 And then spent the rest of the day manning the Open Steno Project table with Josh Lifton, Plover's first programmer and inventor of the Stenosaurus, which should hopefully be coming out in the next few months! Stan helped out too, which was awesome, since he's Plover's first and most illustrious success story. He started on Plover way back in 2010, then wound up teaching himself steno and becoming a Certified CART Provider without ever setting foot in a steno school. 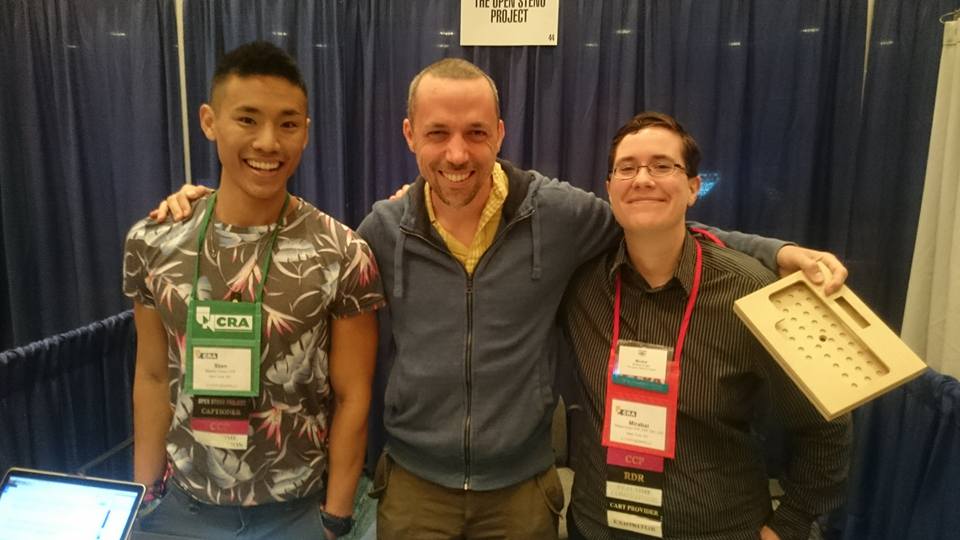 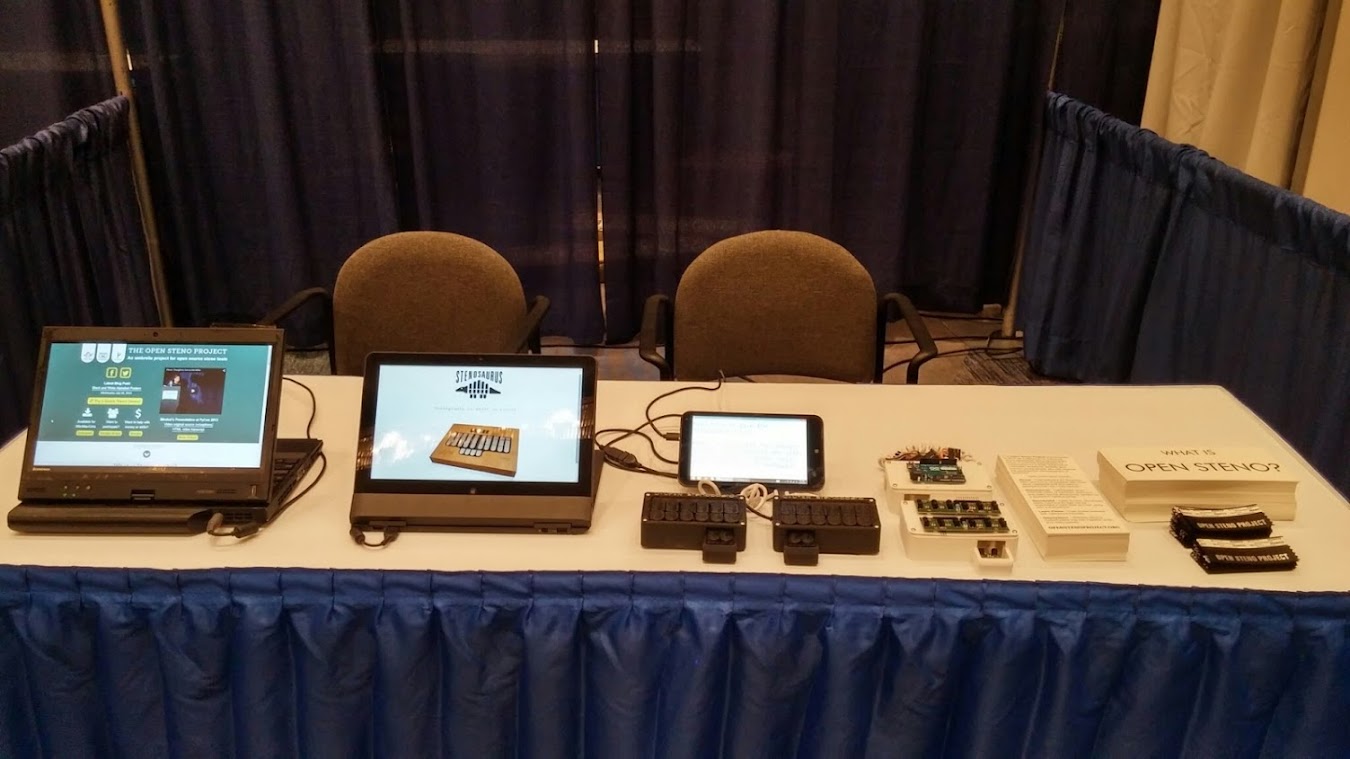 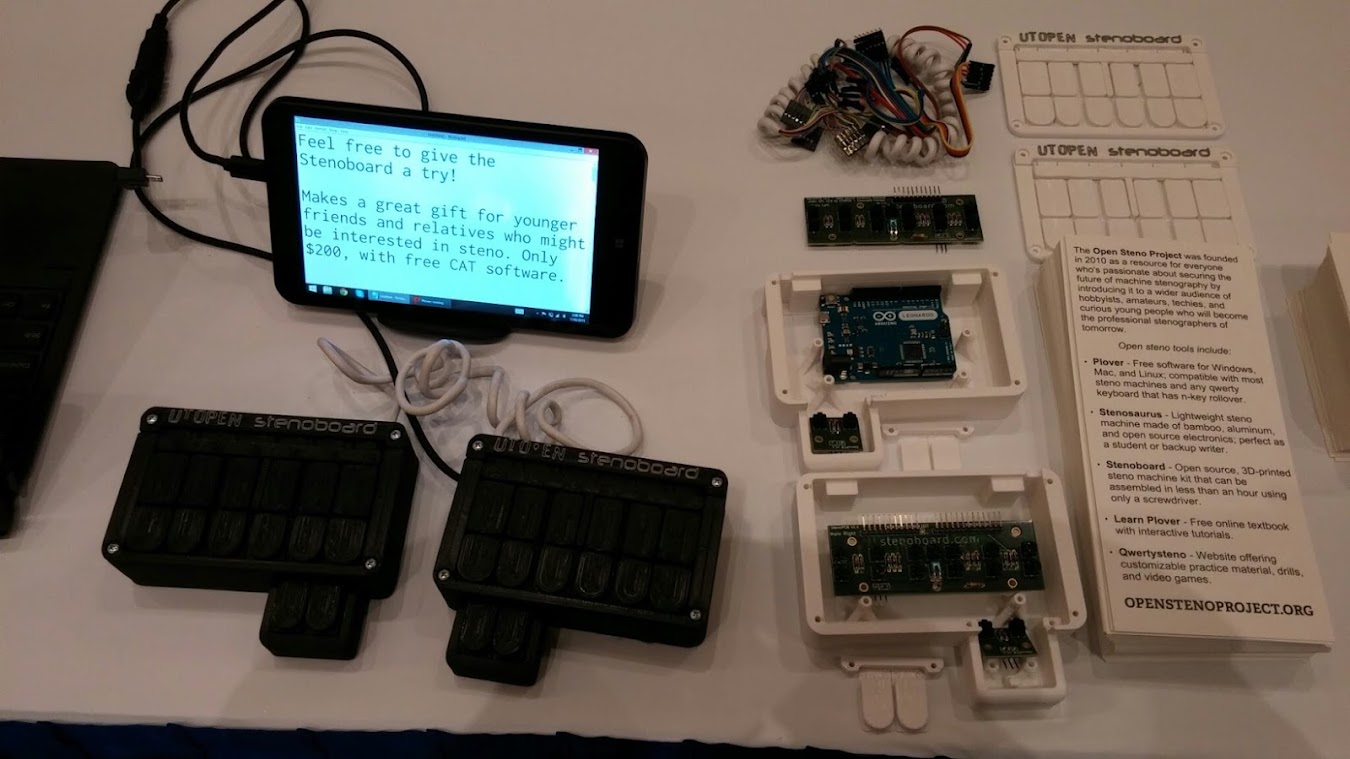 We got a lot of great questions about Open Steno, and several people signed up for the Stenosaurus mailing list or said that they were gonna buy a Stenoboard kit for a younger relative who might be interested in steno, which made me really happy.

Then the White Coat Captioning team (Stan and me plus our fearless leader Norma Miller) assembled for one of our rare but always delightful in-person meetups. We had delicious Indian food for lunch, and got to indulge in our favorite pastime: Talking shop. 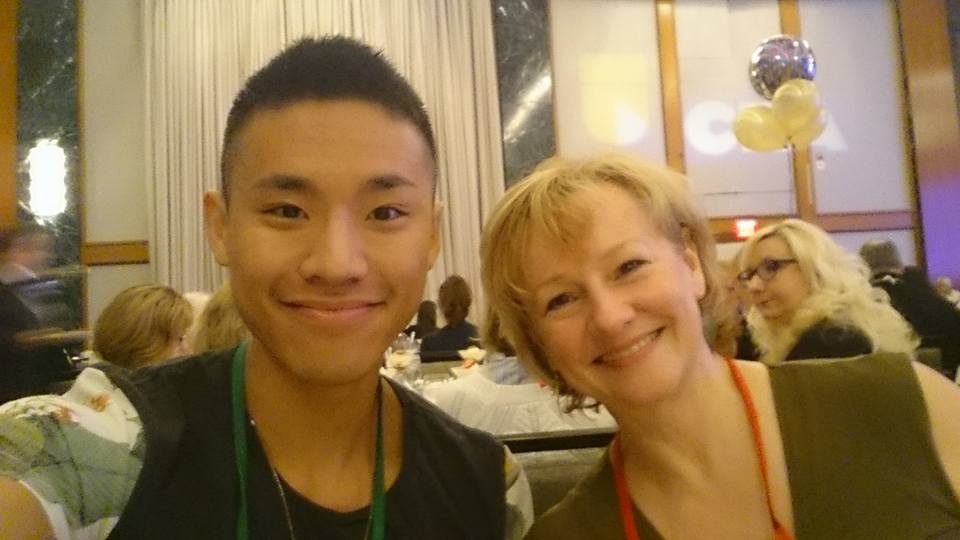 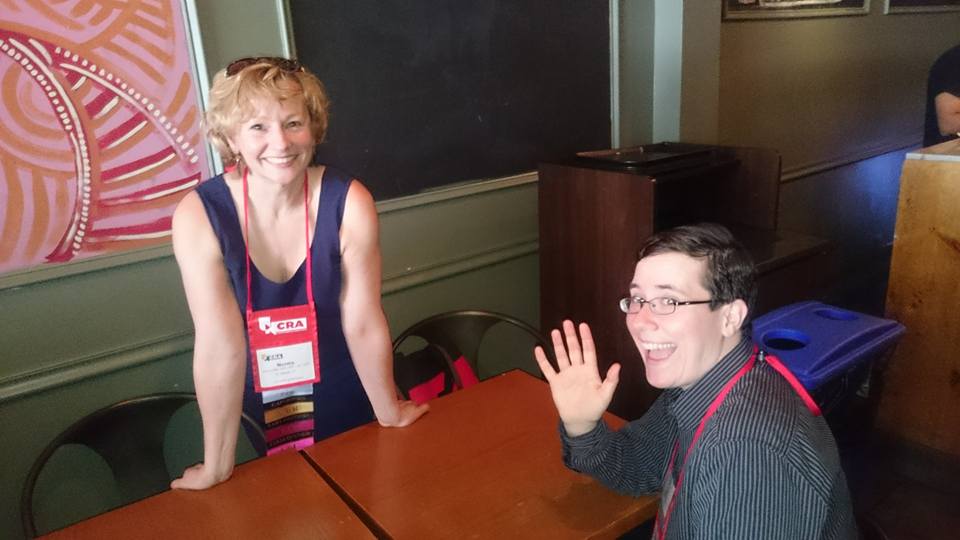 That night we went to the CART/Captioning Reception, and then straight on to the screening of For the Record, which Stan starred in alongside other steno luminaries. At the end they all got up on stage and answered questions, and it was a heck of a good time.

I hadn't managed to go to any sessions on Friday because I'd been so occupied with the Open Steno Project table, but I was kicking myself after Norma told me how amazing she'd found the seminar on Creative and Critical Captioning. I mean, just look at this description:

Composing Sound – A Workshop on Creative and Critical Captioning – Ever wonder what sparks of imagination come from the next generation of caption users and captioner creators? In this workshop, we will explore a number of creative and critical exercises for discussion about — and then the creation of — captioning as another way of thinking about writing. Immersed in digital media, social media, and multimodal texts at all times, college-age students are a part of the next generation of caption-readers and caption-makers (aka, CART-writers). Led by a university professor of college writing courses who is deaf (a CART-user herself), in this workshop we will roll up our CART sleeves and think about the creative and critical potential of captioning for the present and the future.

I was crushed to have missed it, but fortunately Brenda Brueggemann, the deaf professor who led it, did another session on Saturday which I was able to attend: Making an Elevator Speech for Broadcast Captioners/CART Captioners. It was a heck of a lively session, with lots of spirited back and forth, but eventually this is what my group managed to come up with:

Public event captioning benefits everyone, including people with hearing loss, non-native English speakers, people who want to take notes, and people who find that multimodal access helps them to comprehend dense and difficult material.

Professor Brueggemann conducted the session with expert aplomb, and I'd be thrilled if she would consent to come back sometime. In fact, several captioners and I have decided that we're going to petition the NCRA to make an official policy that each convention going forward will have at least one deaf or hard of hearing speaker. They're the people who can best direct us on how we should do our jobs, and their perspectives are absolutely invaluable.

I also got to help out with the Tech Connection session, talking up the TextOnTop system, which now offers automated multilanguage translation and (even more exciting in my book) a micro-USB dongle that works in small tablets such as the HP Stream 7.

Finally it was time for my own session, Advanced Topics in CART. I was pretty worn out by then, but that was okay, because it was much more of a collaborative discussion than a presentation per se. We voted on which subjects were most interesting to the assembled crowd, and came up with the following four areas, which more than filled up the time:

* Proactive conference captioning: How to get conferences to offer captioning without a specific request from a deaf or hard of hearing attendee. We talked over various options, such as putting together compilations of positive feedback for captioning from previous conferences and transmitting them via Storify, asking organizers to conduct audience surveys and write blog posts after each conference, retweeting pro-captioning comments from the conference hashtag while the conference is going on, allowing attendees to get a crash course in steno by playing on our steno machines during breaks, and someone even brought up the possibility of contacting venues such as hotels and convention centers rather than conference organizers themselves, with the thought that if they had a standing resource for captioning, they might be able to reach an even broader sector of conferences. Very promising stuff.

* One-stroke googling: How to configure various types of steno software to make a single touch of a foot pedal or a particular steno stroke search for a highlighted word or name via Google on a secondary monitor. It doesn't seem like any software has this technique completely hammered down yet (Plover can sort of do it, though it's a little cumbersome), but there's high demand for it among remote captioners. Hopefully it'll be readily available across platforms in the near future.

* Dealing with dodgy WiFi: Ways to deal with a dicey WiFi connection, from trying to boost it using systems such as Speedify, trying to work with it by using bandwith-limiting caption systems that used text streaming rather than high-bandwidth screen sharing apps, or circumventing the need for WiFi altogether, when possible, by using cell phone audio, TextOnTop, wireless LANs, or Bluetooth.

* Remote caption audio troubleshooting. I asked the crowd what one element turned their daily audio from a screechy, staticky nightmare into an actual decent job. They had all sorts of answers, including buying a mixer board, pushing for the university to update the video streaming software they use for online courses, using teleconference meeting rooms with "octopus mics", and using the integrated two-mic system offered by OneInterpreting. Unfortunately I forgot to mention my own lifesaving solution for jobs involving a sound board: Making sure the computer running Skype is plugged into a USB audio coupler.

That discussion led into an even more interesting one, about the dangers of hearing loss for both onsite and remote providers. We talked about which jobs we decided to turn down for the sake of our hearing health, a few providers talked about how getting hearing aids helped them to continue the work they loved without any drop in quality, and many of us admitted that the fear that prevented us from getting baseline hearing tests was both counterproductive and potentially career-ending. It was so incredible to be in a room with dozens of my colleagues, all of us with years of experience and vast amounts of passion and knowledge for captioning, sharing tips and commiserating and getting excited about making our jobs even better. It was a magical experience, and I can't express how grateful I am to have been able to be a part of it.

After that, I had to go pack up the Open Steno Table, and by then I was too exhausted to even think about going to the dance that evening. I came home and went to bed with the best of intentions, but didn't manage to wake up in time to go to either of the Sunday morning sessions. It was a marvelous handful of days -- intense, challenging, and fun as all get out. Introvert that I am, I was completely thrilled to be able to shmooze with some of the best stenographers in the country, and to hear all their mindblowing stories. I'm not sure if I'll be able to get out to next year's convention, but I'm so, so glad I got the chance to experience this one in my own home city.
Posted by Mirabai Knight at 10:13 PM