CART PROBLEM: Steno equipment can be bulky to transport from job to job.

Many of my court reporting colleagues carry their equipment with them in a rolling suitcase, but since I live in Manhattan and work at three different onsite universities (plus another one remotely from my home office), I go most places via subway. It's shameful to say, but less than 20% of New York City subway stations are accessible -- that means to people in wheelchairs, parents with strollers, people with other mobility issues, and people carrying rolling suitcases. The elevators in the stations that have them are almost always terribly overcrowded, adding up to half an hour to a regular commute. I certainly didn't want to have to buy a car just to get to work (and New York City traffic is another headache entirely), so I figured that either I had to haul a giant heavy rolling suitcase up and down scads of stairs every morning (not much fun) or I had to get myself a huge, tough, ergonomically optimized backpack.

I've had three backpacks in the time that I've been CARTing professionally. The first was just a big general-purpose backpack with a laptop sleeve in the back and a big central pouch for everything else. I realized the impracticality of that one when I forgot my laptop's power cable while packing for a big open captioning event and I had to phone my partner in a panic to run it down to me at the last minute. Eep. After that I realized I needed to be able to keep track of my equipment at a glance, so I upgraded to a Quiksilver Grenade II, which was originally designed for skateboarders:

I put a different power cable in each of the side pockets and strapped my tripod case to the front where the skateboard was supposed to go. It let me tell whether I had all my cables by just looking at the pockets, but it was kind of annoying to have to unstrap my tripod case every time I wanted to get into the main compartment. So last year I bought a Tamrac 5550 from a photography store, and it turned out to be a massive improvement. Because it's designed for professional photographers, it's got a dedicated tripod case strap at the bottom of the bag, which means no more strapping and unstrapping every time I want to open the bag. It's also got all these great partitions for each of my power cables and other accessories, so that I can tell instantly whether I've remembered to pack everything. It holds both my steno machine and my backup n-key rollover keyboard (for use with Plover), plus my laptop, my Q1 tablet, and lots of other stuff besides.

Here's what my gear looks like when I take it all out of the bag: 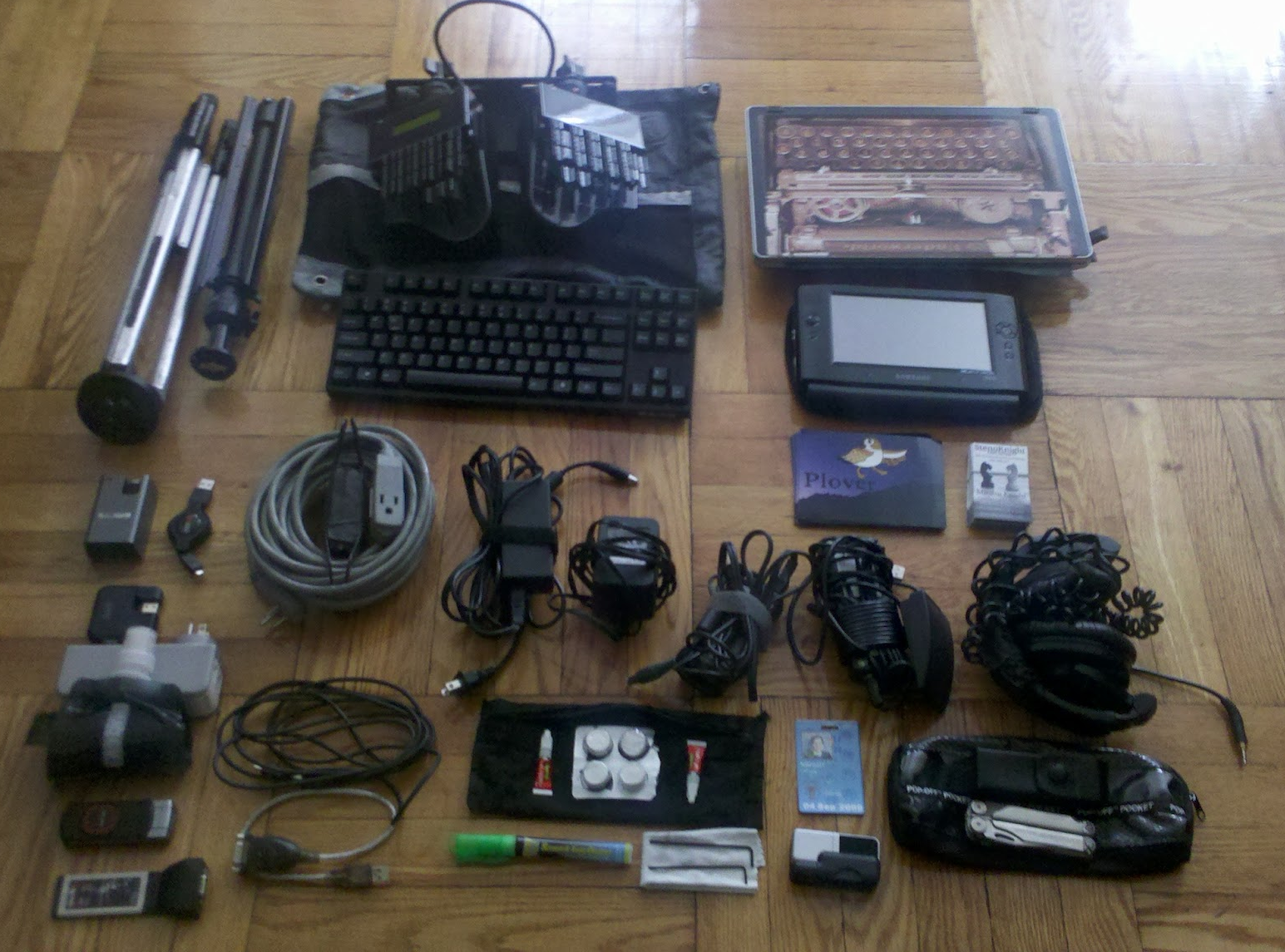 (from left to right)

* Cyberlegs laptop tripod.
* Steno tripod.
* Gunmetal gray Infinity Ergonomic steno machine, on a vinyl zip case that I bought at some college bookstore.
* Lenovo Thinkpad Edge laptop with typewriter decal. That's my $3,000 Eclipse dongle sticking out of one of the right-side USB ports. I've got a Bluetooth dongle in the other.

* USB hub.
* Surge protector with rotating plug head (very good for unpredictable outlet configurations in the field).
* Collapsible water bottle.
* USB to mini USB cable (for USB microphone and as backup steno machine connector if my Bluetooth ever stops working)
* Mini one-time-use superglue dispensers. (You never know when a random student will knock over your steno machine and a key will pop off. Yes, this has happened to me.)
* Towel tablets. So I always know where my towel is. I had five of these last week, but then a student put her wet umbrella on my chair five minutes before class started.
* A pencil case to keep all this little stuff in. I make sure that the superglue dispensers are in a different pencil case from the one containing expensive stuff like my modem and my Leatherman.
* My ID badge from the first time I captioned at the United Nations. I keep it as a kind of good luck charm, I guess.
* My Leatherman, on top of the other pencil case. Good for last minute repairs that superglue and gaffer's tape can't handle.

* My 4G USB Modem. Believe it or not, this thing is fast enough for remote CART (about 10 Mbps download, 2 Mbps upload), and it's also very useful when working on campuses that don't give their CART providers Wi-Fi access.
* Expresscard to serial port converter. I basically only use this when I'm writing to LED signs or doing theater captioning.
* USB to Serial converter. This is the most reliable of its kind that I've seen, but still not as reliable as Bluetooth or the Expresscard. Basically a last resort backup method. I don't carry a serial cable when I'm not doing theater captioning, so obviously I don't use this in my regular CART work.
* Spray-on screen cleaner and microfiber cloth.
* Tiny hex wrenches for adjusting my steno machine.
* USB microphone for remote work.

Not pictured: My homemade gaffer's tape spool, which is basically just a 4-inch length of plastic shelf divider with a bunch of gaffer's tape wrapped around it.

And this is what it looks like when it's all put back in there: 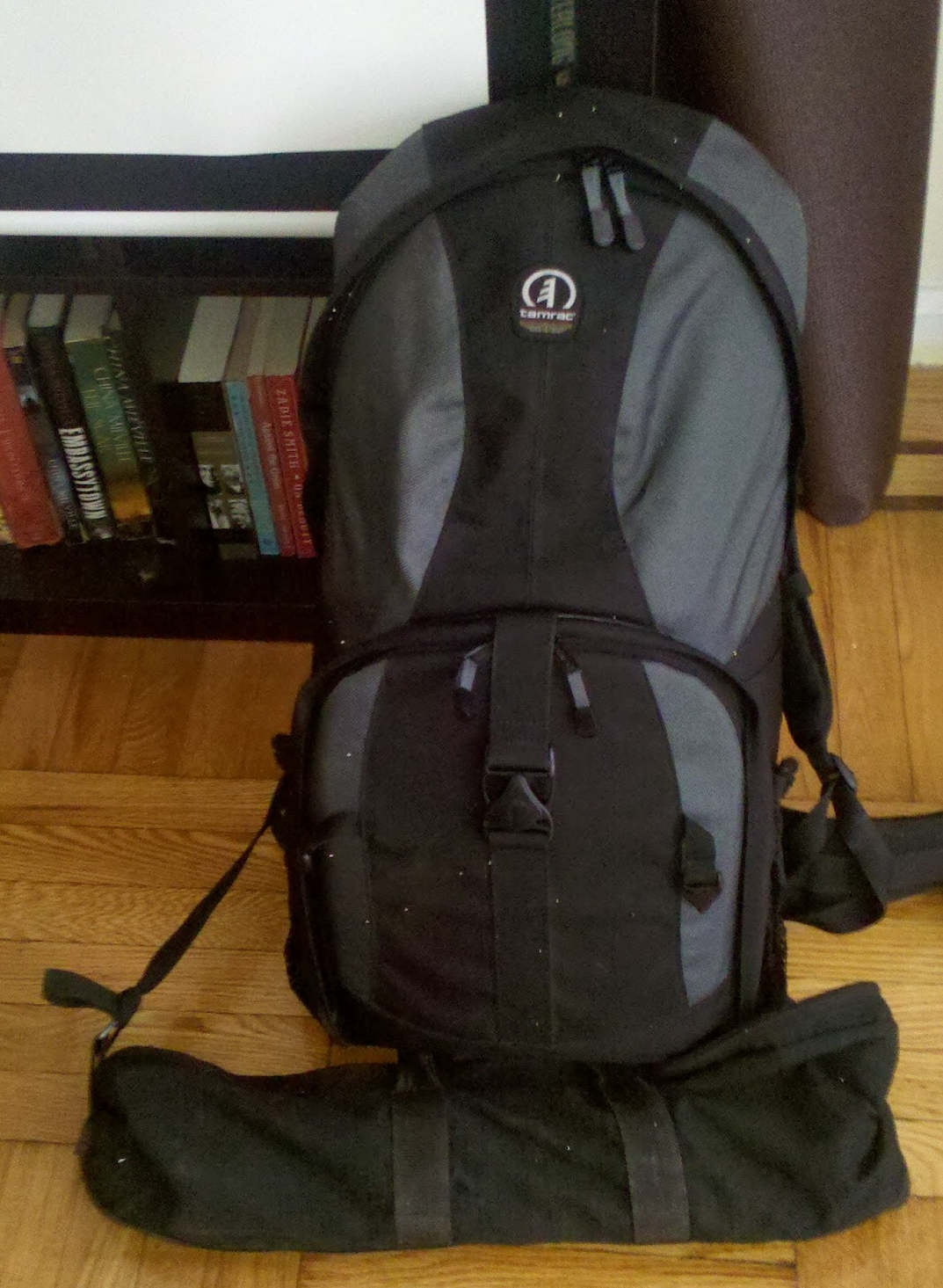 It only weighs about 26 pounds, and the chest and abdomen straps keep my back from aching when I'm hiking around the city. I'm interested to hear about any other stenographers who've chosen to go the backpack route rather than the rolling suitcase route. What do you carry around and what do you leave behind? Are you able to carry at least two computers, in case one crashes? What about steno machines? Feel free to weigh in (ideally with pictures!) in the comments.

Posted by Mirabai Knight at 2:26 PM